After the release of our list building plugin we challenged our users to use Thrive Leads to grow their lists faster and share their results with us. Below you'll see the amazing case study provided by the winner of our challenge. If you've been looking for some ideas you can use to grow your mailing list, read on:

The winning entry comes from our user Julius and the key to his list-building success can be summed up as follows: testing, testing and more testing.

When we created Thrive Leads, our main focus was on the testing and conversion optimizing features because we believe that no matter who you are, you can never fully predict what will work on your website. The only way to optimal results is through empirical testing.

Julius fully embraces this idea and ran a series of test not just on one but on two of his websites.​ Let's take a look at some of the highlights from his experiments.

Julius started by creating a lightbox design for a free report about superfoods and he used it on both of his health related sites Teebaumoel and Gesund Sein Heute: 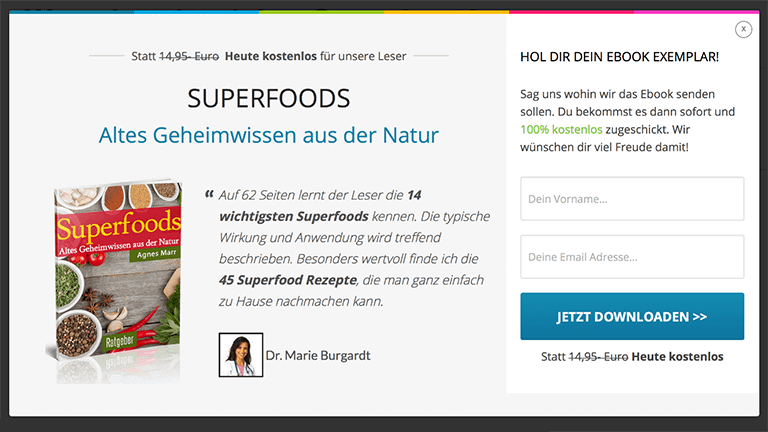 Since the form is in German many of our readers will have trouble grasping all the details, but there are some clever things in the form you can appreciate, even if you can't read the text:

Perhaps my favorite thing about this is Julius' decision to use the same report and lightbox on two sites that aren't all that closely related. He states:

…the superfood ebook is not yet the optimal lead magnet (for the Teebaumoel website). But it’s okay to start with.

This is the rapid implementation concept in action: start with whatever quick win you can get right now and then work on optimizing and getting a "perfect" solution once your list is already growing.

In one of the first rounds of experiments, Julius tested lightbox triggers, asking the question: exit-intent or triggered after 15 seconds - which performs better?

It appears that triggering the lightbox after 15 seconds improves conversion rates by about 50%. To be clear: these results were gathered from only about 1,000 visitors and 58 conversions, so it's not enough data to draw a clear conclusion, but Julius ran the same test on his other site and got similar results. It's certainly an indication that the time delay trigger might be the superior option.

In a different test, Julius uncovered an even more surprising result:​

For this experiment, he tested a "zoom in" animation against a more flashy "zoom & rotate" animation. It would be easy to assume that the entrance animation of a lightbox will have little to no effect on conversion rates, but as it turns out the "zoom & rotate" version looks like a clear winner!

Again, there isn't enough data in this test yet. And the test is a good example of how careful you have to be with test data: it shows more than 100 conversions and a 99% confidence level, but the issue here is that the conversion rates and difference between them are low. It takes more data to reliably detect small differences than large ones, so this is a test that should be kept running for a while.

​Be that as it may, the test shows that results can come from unexpected places and a test doesn't have to be complicated or time consuming to yield good results.

Julius sent us several more examples and screenshots, detailing his journey with Thrive Leads so far. What's clear is that he hit the ground running and he's been getting ever-increasing results and a rapidly growing mailing list since he started using the plugin.

At the moment the lightbox displays after 8 seconds and it converts 33.9% of all visitors of gesund-sein-heute.de into leads. And that is frankly AMAZING for us!

Yes, it may also be due to the fact that I am getting more targeted visitors, for example by publishing and promoting content that engages the visitors better towards my lead magnet (like this blog post). But it’s also because I’m constantly improving the lead generation process and do a lot of testing with Thrive Leads.

In my opinion, Julius is rather understating the second part of that quote.

Thrive Leads is not some magical solution that will solve all your problems and bring you coffee in the morning. But it is a powerful tool and by making use of the A/B testing features, combining it with effective opt-in offers and smart work (such as publishing good, relevant content), it can have a big impact.

Visiting his site after the contest ended showed that Julius isn't stopping anytime soon either, as he's testing the recently released multiple choice feature in one of his forms already: 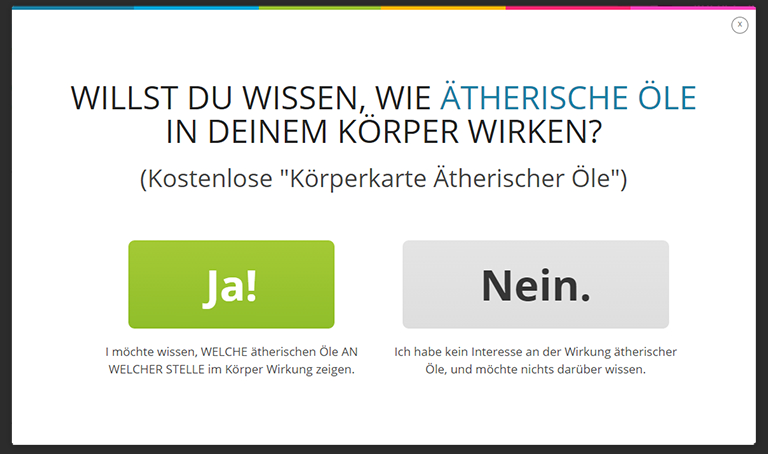 And with that, let me say: congratulations, Julius and thank you for the excellent case study! A well deserved first prize in our contest!

In our contest, we also distributed a secondary prize at random among entrants, so that everyone would have an equal chance of winning something. The $100 Amazon gift card goes to each of the following contestants:

A Big Thank You!

We got many interesting submissions with great case studies and we'll be publishing some of them in the near future. In the mean time, let me just send a big thank you to everyone who participated! It's great to see real-life examples of how our products are being used and how they're making a real difference to your businesses.

If you aren't yet a Thrive Leads user and you'd like to learn more about this WordPress plugin, click here.